Two years ago, Christmas was fast approaching, it’d became even harder to take my daughter to the store. Not because she’s naughty, but because she wanted to get more toys! While it was understandable for her to want them, it was hard to explain to her why she couldn’t get them. My daughter Isabella has no sense of time. When you’re 4, your days string together and for all she knew, Christmas should be every day!

My wife Jill and I did our best to explain that what she couldn’t have that day, she could put on her Christmas list for Santa. As good of an idea as that was, her retort was, “You can buy me toys now and Santa can bring me new ones for Christmas.” We did our best to not laugh, and explained that if we bought her toys then, Santa wouldn’t have anything to bring her. That typically worked, but it was something I had to explain to her every time we went to any store!

After the whole ordeal, I began to think about how I could change my child’s way of thinking. I began to wonder if it was possible to turn the holiday into a time of giving? Would my four year old understand that she already has “Christmas” everyday- and that other children lived their lives very differently than her.

Children can understand what it’s like to be sick and they certainly understand what being scared is. Most all children have been both at one point or another. Jill and I used those reasonings to help our daughter understand the importance of giving. By giving a bear our daughter could help a child who may not be feeling well, she could help a child who is alone and scared in the hospital, she could directly influence another humans life by her simple act of giving.

What started as a few teddy bears and a lesson in giving has turned into a full blown teddy bear drive with the encouragement and excitement of our daughter every step of the way. We’ve partnered with local businesses and expanded the efforts through out the Charlotte area over the last two years- this year Bella’s Bears hopes to collect more than 1000 bears! 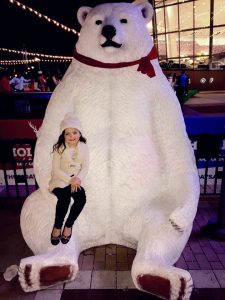